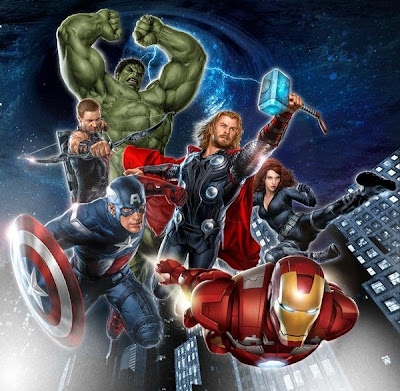 Shortly after the launch of this blog, news came out about the new approach that Marvel was taking with some of its movies. Four years ago, we were hopeful about the idea, but skeptical that it could come to pass. Following this project has been a delight and I for one marvel (pun intended) that they appear to have set themselves up for success in pulling off the greatest comic book movie epic saga of all time. Even though I have trepidations about how it may come out in the end, I have to stand up and applaud their journey thus far and the fact that it is all coming together. In anticipation of this epic movie, and with Thor

due out on DVD and Blu-ray tomorrow, I took a trip down memory lane and did a "Countdown to The Avengers."

(NOTE: Spoilers for all these movies ahead.)
5. Iron Man

Surprisingly, one of the greatest comic book movies of all time. This story sets the stage for the fantastic things to come. From beginning until the closing credits, this movie is Iron Man's. Wisely, they made a sequence with Nick Fury introducing the "Avengers Initiative" the post-credit sequence. Not much is revealed other than there are other super heroes in the world and the name of the project Fury wants to talk to Stark about. It was a gamble to even include this because doing so committed to a long process of assembling parts from four properties into one.
4. Iron Man 2

Even though Hulk was next to be released, I watched this second since it winds up being second in the next step in the Avengers countdown. Iron Man 2 advances the Avengers Initiative plot the most of all the movies, perhaps to a fault because the Iron Man component suffered for it. Still, the movie holds up decently in the context of the larger story. Here we meet Black Widow, Agent Coulson is given some screen time to set up his story in Thor, and the stage is set for Tony Stark to show up in The Incredible Hulk. Cleverly, footage in the background of Stark's final scene with Fury shows scenes from Incredible Hulk. The post-credit sequence is a brief scene that will be further fleshed out in Thor.
3. Incredible Hulk

The most heart-breaking aspect of this whole thing has been that Ed Norton was really good in this movie and for some reason (the green monster known as money, probably), Norton will not be returning for The Avengers. Still, a good movie that brings in components from the super soldier project, and advances Tony Stark's progress through the overall plot as he approaches General Ross at the end of the movie. There is a rumor that Captain America is seen in the background of a deleted scene. I don't buy into it, but it will be interesting to see if that comes up in The Avengers.
2. Thor

Thor advances the Avengers story subtly and not in an overpowering way like Iron Man 2 did. Agent Coulson comes over from the Iron Man movies, references to Tony Stark and Hulk are made, and Hawkeye makes a throw away cameo. Things are left with Thor stuck in Asgard meaning that his return to Earth will have to be dealt with in The Avengers. The post-credit sequence gives us Nick Fury again and shows us the Cosmic Cube which plays a role in Captain America. But this does not seem to tie into Cap, but rather The Avengers. In fact, this post-credits sequence was directed by Joss Whedon.
1. Captain America: The First Avenger

Cap furthers the Avengers Countdown by backing up and going to the beginning. The start of the Super Soldier Serum program is shown when Steve Rogers is picked to become Captain America. Involved in that process is Howard Stark, father of Tony Stark. Also, as just mentioned, a major component of the movie was the Cosmic Cube which is lost and discovered again by Howard Stark. The movie stands on its own but the end sets the stage for further modern day Cap adventures and at the end of the movie, a teaser for Avengers is shown.

So, with all the pieces in place, we're left waiting to see how it all wraps up in The Avengers. And that's the key, that it wraps up. My biggest hope for this movie is that they don't leave anything hanging that needs to be resolved as a group. This is a magical thing they're pulling together that my little nerd brain can't even fathom. There may be multiple Avengers movies, but I hope this first one stands on its own. 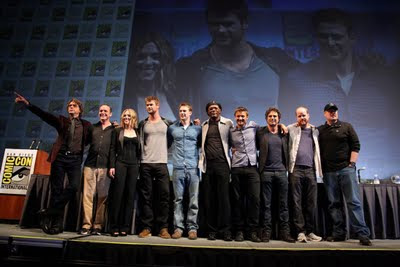